Refugees - We are all connected in Spirit


“Refugees - We are all connected in Spirit”

Candles of Joy and Concern – Mark and Karl


HYMN – When I needed a neighbour


BB Reflection on Refugees – we are all connected in spirit

Subtitle – You are Therefore I Am – Satish Kumar

We are the true colours of faith.

We welcome you whoever you area.

And find yourself amongst true kindred souls.

O join the celebration with us today;

We welcome here all the colours of love:

The red, the yellow, green, the mauve, pink and blue;


We join here in diversity.

We reconcile all our doubts and our fears.

We are one human kind in hunger and thirst;


We join in this place today.

We welcome here every colour and creed.

The feast is here for all the world to share;

Reading: Poem by Sudanese poet who recently drowned in the Mediterranean, foresaw his own passing 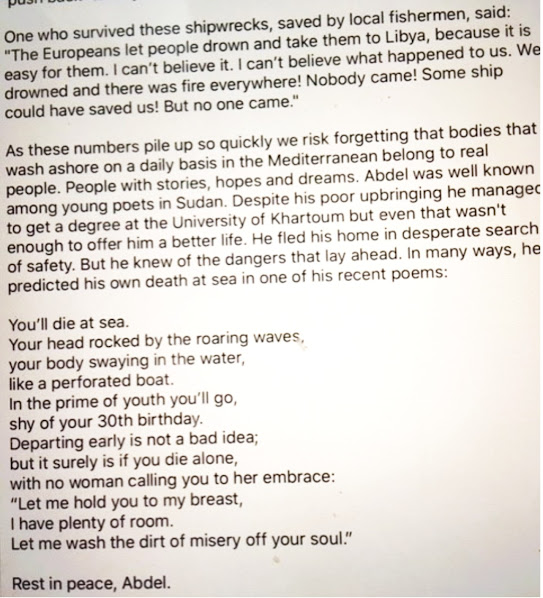 Prayers – Mark - Based on the Loving Kindness ‘Metta Bhavana’ meditation


Prayers – Based on the Loving Kindness ‘Metta Bhavana’ meditation
by Mark Stewart
Watch the thoughts as they arise out of the darkness of your mind.

Watch as they arise, and then let them disappear again, back into the darkness,

Do not try to capture them or hold onto them.

If they are important, trust that they will arise again in due course.

And take a step back from your thoughts.

And take a step back from your thoughts.

They’re getting smaller, tiny waves breaking and falling away on the horizon of your conscience.

And take a step back,

Your thoughts now a tiny harmless dot in the far distance of your awareness.

And bring your focus to whatever you are feeling right now,

And hold it with soft hands,

And welcome it into the presence of your being.

In the first phase of this prayer, we are invited to take some moments for silent prayer for ourselves,

Take a moment to offer your prayers of supplication and thanksgiving to the divine.

Now in the second phase of this prayer, we are invited to take some moments of silent prayer for those who we encounter regularly in our lives; those who we love and those who we can find it difficult to love.

Take a moment to offer your prayers of supplication and thanksgiving for them to the divine.

And now in the third phase of this prayer, we are invited to take some moments of silent prayer for this country, for our neighbourhoods, cities, and our nation.

Take a moment to offer your prayers of supplication and thanksgiving for our nation to the divine.

And now in the last phase of this prayer, we are invited to take some moments of silent prayer for the world; the peoples, places and situations that may well be unknown, alien and foreign to us.

Take a moment to offer your prayers of supplication and thanksgiving for the world to the divine.

Let us pray for healing and rescue for all beings who suffer in mind, body or spirit this moment, this hour, this day.


Abridged version of a Real Testimony

‘We aren’t at all like you. They keep us apart from you at the ferries & motorway services. In your life you will have more conversations with optimists & murderers, yet there are more of us than teachers, farmers & police combined. Our average age is 53, male, white, with bad backs, self medicating with bacon rolls.


When it comes to illegals, we know what the media won’t tell you. We catch them sneaking round the back of our trailers. We are the ones who have to drag them out of the space above the axles or in the shadows behind our backs, like a horror film. As long as their country is a nightmare and ours a dream, they’ll come in the night. But you are the ones who are sleepwalking.


On one trip, I had a co-driver, he would stand on the other side of the trailer and shoo the illegals away, while I filled up with diesel. Let’s call him Mr Hyde. We had a journalist along too, he’s famous but I’ll call him Clark Kent. He asks me ‘Do you feel sympathy?

Me ‘ You can’t, can you? We are the ones who get punished, when one of them stows away. An eight grand fine, with two strokes and you lose your licence.


We get to Calais, go through Customs, then almost into Dover & the three of us go to the lorry deck, ramp down, through the port, stop at the first Chippie van – First Plaice. Give money to Mr Hyde to fetch us fish n chips. I give him the manilla envelope with several hundred quid from the journalist’s paper for coming on board the truck with me and then he’s gone.

Clark Kent says ‘Christ, he’s not coming back, where is he from?’

I said ‘ Syria, most of them can pass for Italian.’

Clark Kent says, still astonished. ‘How many times have you done this? Do they pay you for doing that?

I reply ‘Enough times & no, You, journalist, you’re the first passenger I’ve taken a fee for. No, I don’t take any money. It’s different once you’ve seen their eyes, you realise if they can carry all that, maybe you can take some of the load. You might as well help, life’s over so fast.’

Reading from the Book of Ruth

Now it came to pass that there was a famine in the land of Judah. And a certain man of Bethlehem, went to dwell in the country of Moab, he and his wife Naomi and his two sons. Now they took wives of the women of Moab: the name of the one was Orpah, and the name of the other Ruth. And they dwelt there about ten years. Then both sons and the father died; so Naomi survived her two sons and her husband.

And they said to her, “Surely we will return with you to your people.”

Then they lifted up their voices and wept; and Orpah kissed her mother-in-law and left, but Ruth clung to her.

“Entreat me not to leave you,
Or to turn back from following after you;
For wherever you go, I will go;
And wherever you lodge, I will lodge;
Your people shall be my people,
And your God, my God.
Where you die, I will die,
And there will I be buried.
The Lord do so to me, and more also,
If anything but death parts you and me.”

When she saw that she was determined to go with her, she stopped her entreaties.

Now they came to Bethlehem at the beginning of barley harvest.

And Ruth went and gleaned in the field after the reapers. And she happened to come to the part of the field belonging to Boaz.

Then Boaz said to his servant who was in charge of the reapers, “Whose young woman is this?”

So the servant who was in charge of the reapers answered and said, “It is the young Moabite woman who came back with Naomi from the country of Moab. And Ruth said, ‘Please let me glean and gather after the reapers among the sheaves.’ So she came and has continued from morning until now, though she rested a little in the house.”

Then Boaz said to Ruth, “You will listen, my daughter, will you not? Do not go to glean in another field, nor go from here, but stay close by my young women. Let your eyes be on the field which they reap, and go after them. And when you are thirsty, go to the vessels and drink from what the young men have drawn.”

So she fell on her face, bowed down to the ground, and said to him, “Why have I found favour in your eyes, that you should take notice of me, since I am a foreigner?”

And Boaz answered and said to her, “It has been fully reported to me, all that you have done for your mother-in-law since the death of your husband, and how you have left your father and your mother and the land of your birth, and have come to a people whom you did not know before. The Lord repay your work, and a full reward be given you by the Lord God of Israel, under whose wings you have come for refuge.”

‘Gracias a la Vida’ Version sung by Isabel Parra, daughter of Violeta Parra, Chilean composer/ musician & community inspiration until death 1966. Isabel Parra became a refugee after the military coup in Chile in 1973, living in France then Argentina, toured the UK and returned to Chile with restoration of democracy.
https://youtu.be/Buw4e9RKruQ 3 min 59


Gracias a la Vida translates “Thanks to life which has given me so much”.

Thank you to life, which has given me so much.
It gave me two beams of light, that when opened,
Can perfectly distinguish black from white
And in the sky above, her starry backdrop,
And from within the crowd
The man that I love.

Thank you to life, which has given me so much.
It gave me sounds and the alphabet.
With them the words that I think and declare:
“Mother,” “Friend,” “Brother” and the light shining.
The route of the soul from which comes love.

Thank you to life, which has given me so much.
It gave me an ear that, in all of its width
Records—night and day—crickets and canaries,
Hammers and turbines and bricks and storms,
And the tender voice of my beloved.


Thank you to life, which has given me so much.
It gave me a heart, that causes my frame to shudder.
When I see the fruit of the human brain,
When I see good so far from bad,
When I see within the clarity of your eyes…


Thank you to life, which has given me so much.
It gave me the ability to walk with my tired feet.
With them I have traversed cities and puddles
Valleys and deserts, mountains and plains
And your house, your street and your patio.

Thank you to life, which has given me so much.
It gave me laughter and it gave me longing.
With them I distinguish happiness and pain—
The two materials from which my songs are formed,
And everyone’s song, which is my very song.

Thank you to life, which has given me so much.