Rev. Maria Pap from the Transylvanian Unitarian Church visited both our Bristol congregations on 3rd and 4th August 2014.

During her time in Bristol she was interviewed about her visit by a reporter from the Bristol Post.

Below is the link to the article on the Bristol Post website, and a scanned in copy from the newspaper print version.

Click on the image to enlarge, then use your computer's zoom function if you still can't read the text. 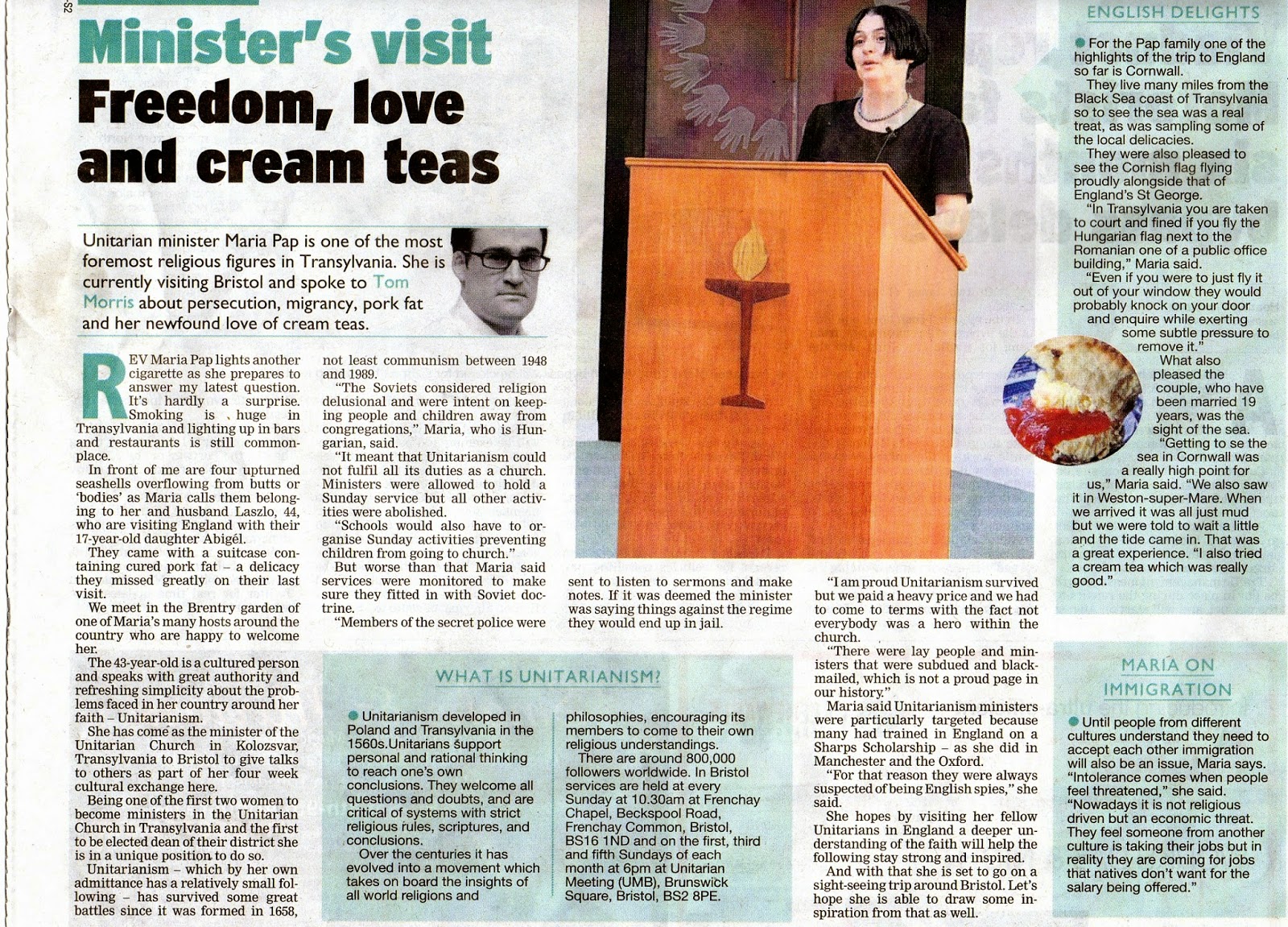 Plain text from the article:

REV Maria Pap lights another cigarette as she prepares to answer my latest question. It's hardly a surprise. Smoking is huge in Transylvania and lighting up in bars and restaurants is still commonplace.

In front of me are four upturned seashells overflowing from butts or 'bodies' as Maria calls them belonging to her and husband Laszlo, 44, who are visiting England with their 17-year-old daughter Abigél.

They came with a suitcase containing cured pork fat – a delicacy they missed greatly on their last visit.

We meet in the Brentry garden of one of Maria's many hosts around the country who are happy to welcome her.


The 43-year-old is a cultured person and speaks with great authority and refreshing simplicity about the problems faced in her country around her faith – Unitarianism.

She has come as the minister of the Unitarian Church in Kolozsvar, Transylvania to Bristol to give talks to others as part of her four week cultural exchange here.

Being one of the first two women to become ministers in the Unitarian Church in Transylvania and the first to be elected dean of their district she is in a unique position to do so.

Unitarianism – which by her own admittance has a relatively small following – has survived some great battles since it was formed in 1658, not least communism between 1948 and 1989.

"The Soviets considered religion delusional and were intent on keeping people and children away from congregations," Maria, who is Hungarian, said.

"It meant that Unitarianism could not fulfil all its duties as a church. Ministers were allowed to hold a Sunday service but all other activities were abolished.

"Schools would also have to organise Sunday activities preventing children from going to church."

But worse than that Maria said services were monitored to make sure they fitted in with Soviet doctrine.

"Members of the secret police were sent to listen to sermons and make notes. If it was deemed the minister was saying things against the regime they would end up in jail.

"I am proud Unitarianism survived but we paid a heavy price and we had to come to terms with the fact not everybody was a hero within the church.

"There were lay people and ministers that were subdued and blackmailed, which is not a proud page in our history."

Maria said Unitarianism ministers were particularly targeted because many had trained in England on a Sharps Scholarship – as she did in Manchester and the Oxford.

"For that reason they were always suspected of being English spies," she said.

She hopes by visiting her fellow Unitarians in England a deeper understanding of the faith will help the following stay strong and inspired.

And with that she is set to go on a sight-seeing trip around Bristol. Let's hope she is able to draw some inspiration from that as well.